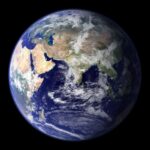 1. Pangaea Pangaea or Pangea was a supercontinent that existed during the late Paleozoic and early Mesozoic eras. It assembled from earlier continental units approximately 335 million years ago, and it began to break apart about 175 million years ago. Pangea was surrounded by a global ocean called Panthalassa, and it was fully assembled by the Early Permian Period. During… Read more →