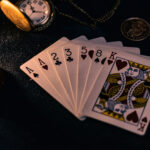 The history of Kings in Playing cards

The king card is the oldest and most universal court card. It most likely originated in Persian Ganjifeh where kings are depicted as seated on thrones and outranking the viceroy cards which are mounted on horses. Playing cards were transmitted to Italy and Spain via the Mamluks and Moors. The best preserved and most complete deck of Mamluk cards, the Topkapı pack, did not display human figures but… Read more →